A trip to Shrublands

In the novel Thunderball and following an unsatisfactory medical, Bond is sent ﻿to a health clinic in Sussex.  He travels from London via train but takes a taxi from the station to the town of Washington.

Fleming doesnt mention the railway station but we can deduce it is Burgess Hill Station which is "'bout half an hour" away.  From the text it is clear Bond is not collected from Brighton and the small station at Hassocks does not appear to have had any traffic islands (roundabouts) close by for the cab driver to negotiate at the time.

The route takes Bond to Shrublands through Sussex Downs towns of Poynings and Fulking. 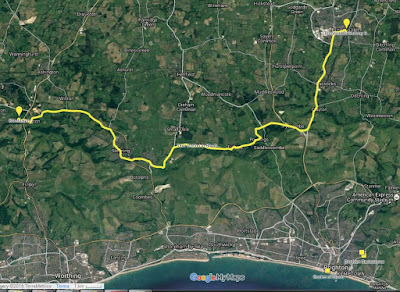 During the taxi ride, Bond and the Cab driver discuss the Bucket of Blood, the nickname of the Astor Club which was the location of a notorious police corruption case in 1954.  Also in close proximity to each other are Brighton Racecourse where the cab driver sees as the source of his future fortunes and Brighton Central Hosptial (actually Brighton General Hospital) where Count Lippe recovers from his burns.

Bond's mode of transport was an Austin taxi which was 20 years old.  With Thunderball taking place in 1958 then the most likely model was the Austin Low Loading Taxi Cab which was introduced in 1934.

This project is focused around a Google Map of all the locations I have found so far. It is a continual work in progress but there are about 850 locations pinned so far plus many travel routes.
Go to the Google Map
As well as just browsing the map, the idea is that you can also follow the map whilst reading each Bond book. The pins are in chronological order by novel and there is also additional information against many of the featured locations.
Interested in 007's plane journeys? Check out Bond's Flight Memory
Follow @bondmaps