As the headquarters of the Secret Service, London is a setting in most of the Bond novels and none as much as in Moonraker.  The book mentions a number of locations and describes Bond’s journeys around the capital in detail.

In the second half of the book, Bond has arranged to meet Gala at Scott’s restaurant on the corner of Coventry Street and Great Windmill Street.  When she doesn’t appear, he calls Ronnie Vallance who is at an event at Mansion House and concludes that he should seek out Drax at his club.  What follows is an exciting chase between London and the South Coast.

Blades of course is a fictional club but is a based on a mixture of other clubs in the area of St James.  The exterior appears to be similar to the nearby Boodle's club but the location is that of Pratt’s club on Park Place (which Fleming renamed Park Street). Bond parks outside Boodle’s where he can keep an eye on Drax’s car around the corner. 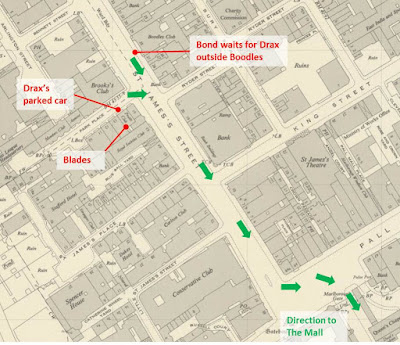 When Drax leaves Blades, he turns into St James’s Street, then a quick left/right into Pall Mall and Marlborough Road.  The chase then goes through the Mall, around the roundabout outside Buckingham Palace and towards Drax’s house on Ebury Street. 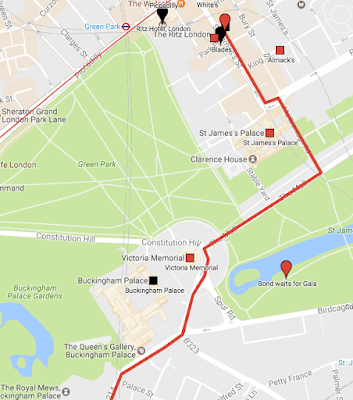 I was tracing the route of the chase and was initially struggling to place the location of Drax’s house.  Drax passes through the traffic lights at Lower Grosvenor Place and then quickly turns into Ebury Street which doesn’t add up on an modern map.  I did some digging and found that the upper end of Ebury Street was renamed Beeston Place in 1966.   This means that Bond waits for Drax at the corner of what is now Beeston Place and Lower Grosvenor Place and that Drax’s house is probably located at today’s number 3, 3a, 5 or 7 Beeston Place.  Followers of Fleming will note that he lived at two different addresses in the area, in Victoria Square and further down Ebury Street itself. 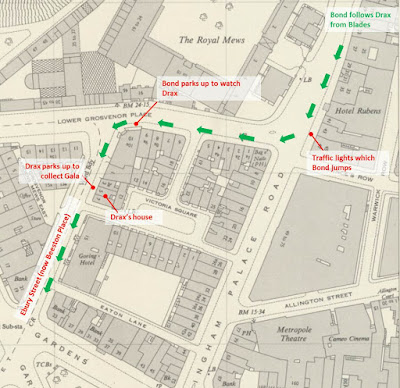 After Drax leaves his house, the chase continues down Ebury Street, across Chelsea Bridge and through Clapham Common.  As they continue out of London, the cars take the South Circular road and then join the A20 at Eltham.  Various parts of the A20 have been changed over the years since the book was written but the basic route remains the same.

Just after Wrotham Hill, they pass the turning for Mereworth and the nearby woods that are mentioned earlier in chapter 18.  Just before Maidstone there is the Thomas Wyatt Hotel which is a real location and in the town itself there is the Royal Star hotel, now the Royal Star Shopping Centre. 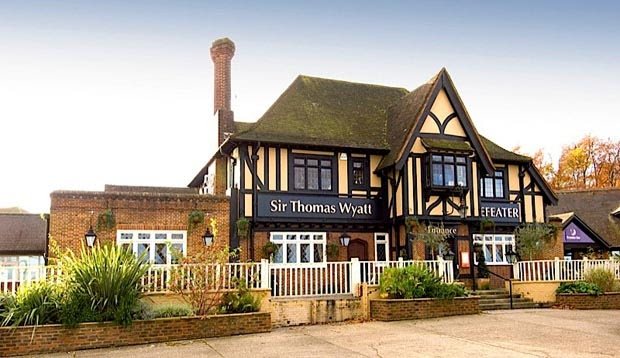 At Leeds Castle, Attaboy II joins the chase and is unceremoniously run off the road by Drax just before Charing Fork.  Heading up Charing Hill, Drax comes up behind a newsprint lorry from Bowaters, at the time the world’s largest producer of newsprint.  Krebs releases a number of rolls from the truck which run down the hill and causes Bond to crash his car into some iron railings. 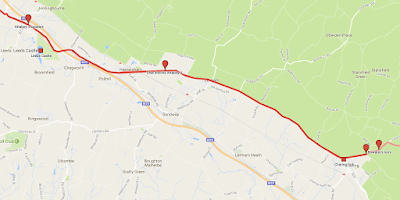 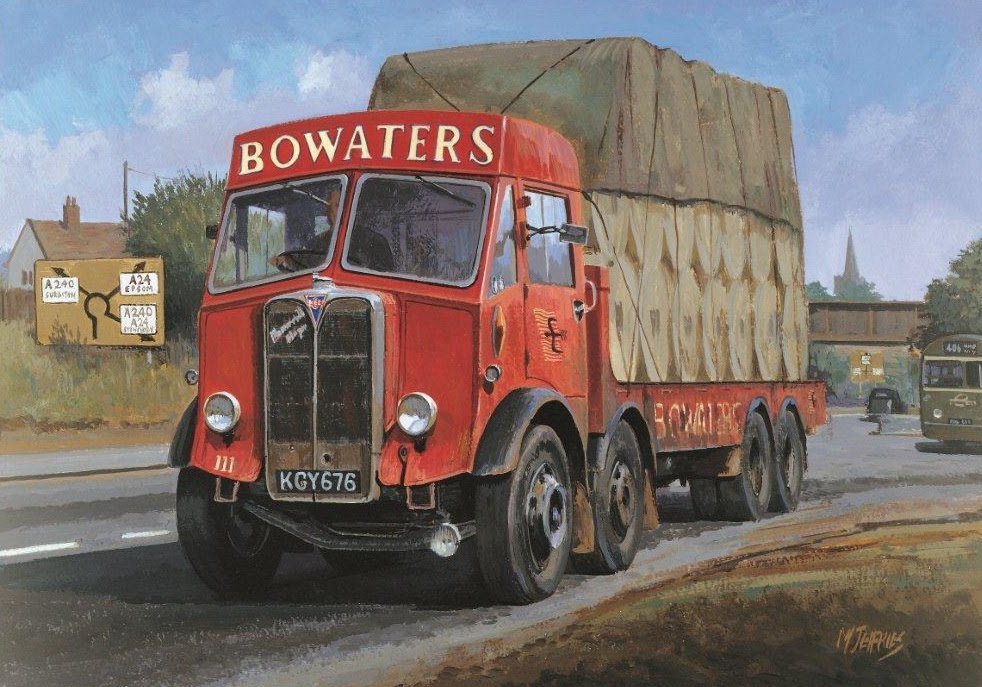 The rest of the trip to the launch site at Kingsdown is not described in detail but we can assume it follows the same route as Bond’s drive in chapter 10.  After Chilham Castle it was a right turn at Canturbury into the Old Dover Road. 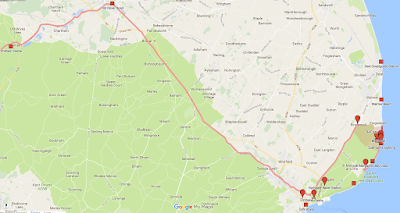 
At the right turn towards Kingsdown there was the fictional World Without Want inn.  In reality, this is the location of the Five Bell’s pub which is still there today. 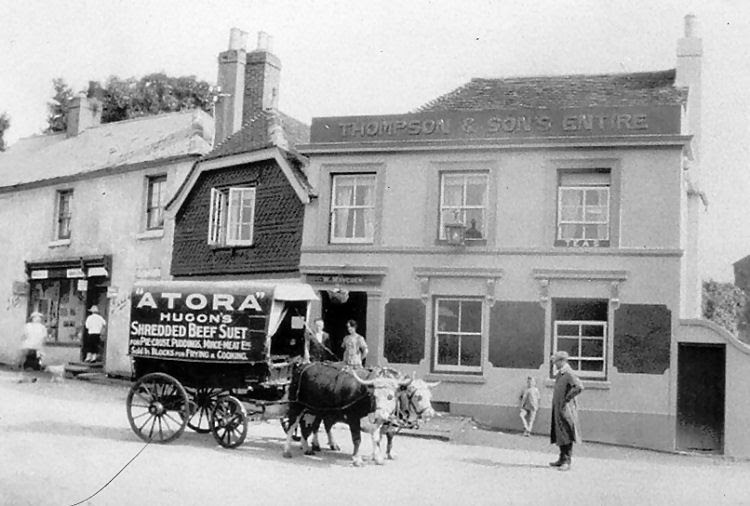 The launch site itself is located on the Walmer & Kingsdown golf course and we shall explore the area in more detail in a later post.
Posted by Bond Maps at 18:51

This project is focused around a Google Map of all the locations I have found so far. It is a continual work in progress but there are about 850 locations pinned so far plus many travel routes.
Go to the Google Map
As well as just browsing the map, the idea is that you can also follow the map whilst reading each Bond book. The pins are in chronological order by novel and there is also additional information against many of the featured locations.
Interested in 007's plane journeys? Check out Bond's Flight Memory
Follow @bondmaps